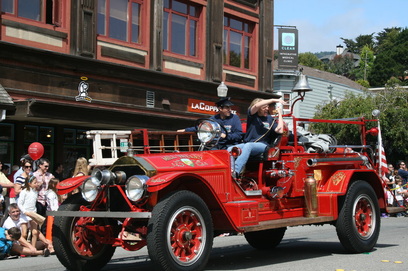 You might not know that Mill Valley was once the location of a Miwok Village, the site of a sawmill and, years later, a primary tourist destination for early 20th Century thrill seekers. What you see around you today is a vibrant city with a small town vibe and big city sophistication. If you look closely, vestiges of Mill Valley’s fascinating past remain.

Mill Valley’s earliest residents were Coastal Miwok, who lived throughout the North Bay. When Spanish Missionaries came to the area, many of the Miwok who did not perish from European diseases, moved to the Mission in San Rafael. Reminders of that era can still be seen on Locust Avenue between Sycamore and Walnut, where a metal plaque set in the sidewalk marks the birthplace of Chief Marin and on nearby Ring Mountain, where Miwok rock carvings and grinding sites remain.

In 1834, John Thomas Reed, an Irish immigrant, was given Tiburon, Belvedere, and parts of Corte Madera and Mill Valley as a Mexican land grant. He established a mill along Cascade Creek to provide lumber for San Francisco’s new military post in the Presidio. His crews harvested the coastal redwoods around the area and used the open, rolling hills for grazing dairy cattle. The lush redwood trees you see spread throughout Mill Valley today are largely second growth groves.

When the railroad reached downtown in 1889, Mill Valley became easier to access from San Francisco, drawing in more families, businesses and visitors. In 1890, nearly 3,000 people attended The Tamalpais Land & Water Co. land auction near the now-crumbling sawmill. More than 200 acres were sold that day in the areas of present day Throckmorton, Cascade, Lovell, Summit, and Miller Avenues and extending to the west side of Corte Madera Avenue. The railway, mud baths and opportunities for hunting and camping made Mill Valley a popular summer vacation locale, and many summer homes were built.

The Mount Tamalpais Scenic Railway opened in 1896 and ran from Mill Valley’s town center all the way to Mount Tam’s summit. Called “The Crookedest Railroad in the World," thousands of tourists came to Mill Valley to travel to the end of the line, then return on a thrilling ride by gravity car. These 30-passenger cars had only a brakeman to control the roller-coaster descent back to Mill Valley. In 1907, the railroad added a branch line into what is now Muir Woods. Today, The West Point Inn, which once served train riders on their way up Mount Tam, is a rustic overnight resort and resting stop for hikers and mountain bikers. Depot Plaza, in downtown Mill Valley, shows off a reconstructed gravity car, a wonderful memento of those adventurous visitors. You can also visit the Gravity Car Barn at the summit of Mount Tamalpais.

By 1900, the population of Mill Valley was nearing 900, and the city incorporated. After the great San Francisco earthquake and fire in 1906, a small number of San Francisco residents moved here, along with other parts of Marin. In 1929, a great fire on Mt. Tam raged for several days, destroyed many homes and nearly destroyed downtown Mill Valley. The fire and the era of the automobile eventually lead to the closing of the Mount Tamalpais Scenic Railway.

During the Great Depression, famous local landmarks were constructed, with the help of the Works Progress Administration and the Civilian Conservation Corps, including the Mountain Theater’s rock seating and the Mead Theater at Tam High. The construction of the Golden Gate Bridge ended railroad commuting between Marin County and San Francisco and further boosted Mill Valley’s population.

During World War II, Marinship, a shipbuilding company located in Sausalito, brought over 75,000 people to Marin, many of whom moved to Mill Valley permanently. By 1950, with a population just over 7,000, Mill Valley was still relatively rural, with no traffic lights. In the 1950s, 1960s and 1970’s, new schools and neighborhoods cropped up, but Mill Valley maintained its defense of redwoods and protected open space. The result is a string of lovely municipal parks, including Old Mill Park, where Reed’s sawmill once stood.

Some people say that Mill Valley’s reputation as a local arts and entertainment destination began with the first Mountain Play on Mount Tam. Others point to 1956, when a group of Beat poets and writers lived here. Regardless of how it started, Mill Valley has been a draw for well-known and lesser-known artists and musicians throughout the years. In 1962, the Mill Valley Fall Arts Festival became an annual event. The renowned Mill Valley Film Festival was founded in 1978.

If you would like to learn more about Mill Valley’s history, a great place to start is the Lucretia Hanson Little History Room at the Mill Valley Library. The room displays a special collection of vintage photographs, paintings, books, maps, oral histories and other documents, depicting life in Mill Valley and the surrounding area. You can also contact the Mill Valley Historical Society for more information.